While we try to cover as much as we can in our episodes, there's always more to see, hear, and read about a movie that can enhance your viewing experience. If you enjoyed our episode on Clerks, here's a few extra bits you might find interesting... 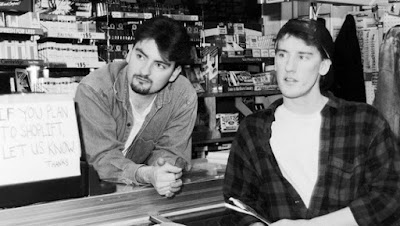 Here's the original trailer for the movie:

We mentioned the alternate ending that director Kevin Smith thankfully cut before the film's release. Take a look at it here:

Smith directed a music video for "Can't Even Tell," Soul Asylum's contribution to the soundtrack, that was shot at the original location and featured actors Brian O'Halloran, Jeff Anderson, and Jason Mewes:

After the success of the film, a watered-down sitcom version went to pilot without the participation of Smith, the cast, or the crew. Thankfully it wasn't picked up. Check it out here if you dare:

Smith did oversee an animated series that aired on network TV. Here's a trailer for the DVD release of the series:

Smith used the animated series aesthetic to produce the "lost scene," where we actually see what happens at the disastrous funeral in the film:

Though initially resistant to film a sequel, Smith continued to revisit the movie's main characters in small ways for several years. This short film featuring Dante and Randall appeared on The Tonight Show:

Clerks did finally direct a sequel catching up with the characters 12 years later:

As we noted, a biopic chronicling the filming of Clerks, called Shooting Clerks, is on the way. Here's a teaser trailer:

Thanks for listening!
Posted by Cinemaspection at 7:53 PM