While we try to cover as much as we can in our episodes, there's always more to see, hear, and read about a movie that can enhance your viewing experience. If you enjoyed our episode on Gojira / Godzilla: King of the Monsters, here's a few extra bits you might find interesting... 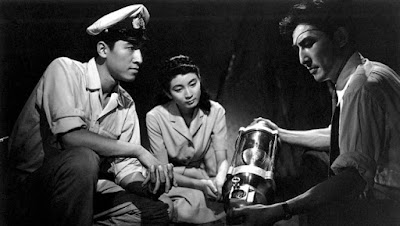 Here's the hyperbolic trailer for the American version:

Of course the film served as an expression of Japan's national trauma regarding the atomic bombs dropped on Hiroshima and Nagasaki, as well as a protest against continued testing of H-Bombs. This newsreel film shows the devastating effects the Hiroshima blast had on survivors, referenced directly in the film. Warning: Some of this footage is graphic and very disturbing:

The Italian release of the film in 1977 featured rough colorization, extra stock footage, and a new music score. Check out this variant version here:

Godzilla has also not been above doing product endorsements, as seen in these 1985 ads for Dr. Pepper:

This month sees the release of the new Legendary Pictures film, Godzilla: King of the Monsters. Here's the trailer:

And what discussion of Godzilla would be complete without Blue Oyster Cult's classic anthem to Our Lord and Atomic Saviour:

Posted by Cinemaspection at 5:24 PM