While we try to cover as much as we can in our episodes, there's always more to see, hear, and read about a movie that can enhance your viewing experience. If you enjoyed our episode on Jurassic Park, here's a few extra bits you might find interesting... 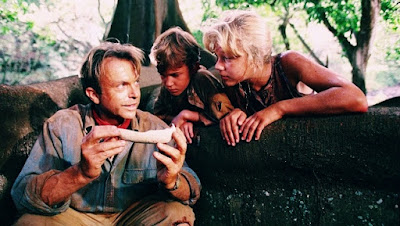 Here's the ominous teaser trailer for the film, containing no actual footage:

Cinema has had a fine tradition of dinosaur movies going back to the silent era. This compilation will give you a taste of how the terrible lizards have been depicted on film, from The Lost World all the way up to Jurassic World:

The film is famous for its ground-breaking computer effects. In this montage, we see before-and-after shots illuminating the incredible work by the wizards at Industrial Light and Magic to recreate the dinsoaurs:

In addition to ILM, dinosaurs effects were also provided by Stan Winston Studios. These video document the creation of the T-Rex and Raptor puppets for the film:

The film inspired several spoofs, including this clay-mation video from 'Weird Al' Yankovic for his song "Jurassic Park:"

In this College Humor spoof, Martin Ferrero reprises his role as Donald Gennaro, who comes to realize his character's limited role in the film:

Or this majestic cover of the movie's main theme:

The film's distinguished paleontological consultant, Jack Horner, has proposed using genetics to re-engineer a chicken into a close approximation of a dinosaur. While we have our own opinions about the feasibility of this project, listen to Horner discuss his proposal in this TED talk:

Thanks for listening!
Posted by Cinemaspection at 7:39 PM