It Happened One Night - Supplement

While we try to cover as much as we can in our episodes, there's always more to see, hear, and read about a movie that can enhance your viewing experience. If you enjoyed our episode on It Happened One Night, here's a few extra bits you might find interesting... 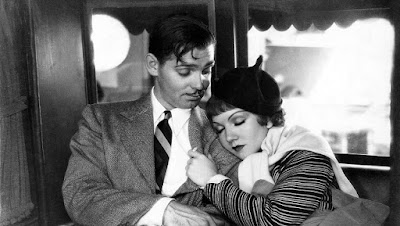 As was often the case back then, both Colbert and Gable also starred in a radio adaptation of the film for the Lux Radio Theater: Here's the original program:

However much Colbert didn't want to make the movie, she gave a very gracious speech at the AFI tribute to Frank Capra in 1982 regarding her experiences during the filming:

The film had a huge impact on filmmakers and the romantic comedy genre in general. In these clips, Cameron Crowe and Elizabteh Perkins discuss the influence of the film:

In this intro for Turner Classic Movies, host Ben Mankiewicz discusses the how the film turned into a sleeper hit and the legends about Gable's influence on undershirt sales:

Thanks for listening!
Posted by Cinemaspection at 7:40 PM