While we try to cover as much as we can in our episodes, there's always more to see, hear, and read about a movie that can enhance your viewing experience. If you enjoyed our episode on Rope, here's a few extra bits you might find interesting... 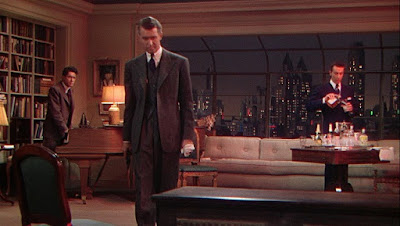 Here's the trailer for the film. Like many Hitchcock trailers, it contains a lot of specially-shot that is not used in the film. In fact, actor Dick Hogan, who plays David, has more screen-time and dialogue in the trailer than he does in the actual film:

If you're interested in more details on the filming of Rope, here's an excellent documentary, "Rope Unleashed," created for the film's home video releases. Pardon the Spanish subtitles:

We noted Hitchcock's cameos in the film. If you missed them, here are screenshots of how they appear in the film:

We mentioned an article in Scientific American discussing the perception of time and how the film tricks the audience into believing more time has passed than actually has. Here's a link to the article, "Remembering When," by Antonio Damasio, with a subsection specifically dealing with the film:

While Rope was based on a play by Patrick Hamilton, many modern stagings of the play take more from the film adaptation. Here's a production of the play as performed by the Florida College Footlighters:

We mentioned the 1983 BBC radio adaptation starring Alan Rickman, five years before his breakthrough performance in Die Hard. This adaptation hews closer to the original text of the play. Give it a listen here:

The story also derives from the true case of the Leopold and Loeb murder. Here's an episode of the documentary series The American Experience detailing the crime and the subsequent trial:

Thanks for listening!
Posted by Cinemaspection at 7:41 PM

Email ThisBlogThis!Share to TwitterShare to FacebookShare to Pinterest
Labels: 1940s movies, Alfred Hitchcock, based on a play, based on a true story, behind the scenes, cameo, radio plays, Supplemental material, Trailers