While we try to cover as much as we can in our episodes, there's always more to see, hear, and read about a movie that can enhance your viewing experience. If you enjoyed our episode on Who Framed Roger Rabbit, here's a few extra bits you might find interesting... 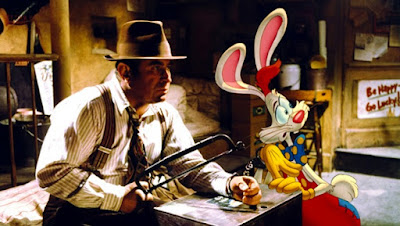 Here's a behind-the-scenes video showing some of the special effects tricks:

We mentioned some of the test films that served as a proof-of-concept for the film. Take a look:

We discussed the notorious "pig head" scene cut from the film. Take a look at it here and decide for yourself if the film is better for it being removed (Pardon the subtitles):

Corinne mentioned that Betty Boop was known for her cigarette girl routine in a previous animated short. Here's the cartoon she was referencing:

Roger and Baby Herman returned to theaters in several cartoon shorts that played before Disney films. Here they are, starting with Tummy Trouble, which played before Honey, I Shrunk the Kids:

And here's Trail Mix-up, which played before A Far Off Place:

Posted by Cinemaspection at 10:02 PM