While we try to cover as much as we can in our episodes, there's always more to see, hear, and read about a movie that can enhance your viewing experience. If you enjoyed our episode on Star Trek: The Motion Picture, here's a few extra bits you might find interesting... 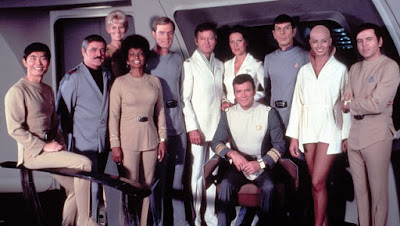 Here's the famous teaser with narration by Orson Welles himself:

And here's the full trailer:

Many scenes from the film were left on the cutting room floor only to be resurrected for the TV version. Here's one we mentioned in the episode, as an excited Sulu gets Ilia up to speed. Steady on, Kikaru:

This scene, a fragment of the uncompleted original spacewalk scene, was inserted into some television and video versions when Kirk goes out to retrieve the unconscious Spock. Note that the special effects weren't completed as when Kirk exits the ship, you can see the soundstage around him that would have been replaced by a matte painting. Oops:

Marcello Rossi's website has some excellent photos and information on the deleted spacewalk scene as can be viewed here: 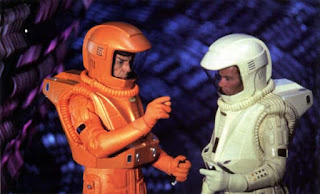 We discussed the amazing post-Star Trek career of Uhura herself, Nichelle Nichols, and her involvement with NASA. Here's a Q&A with Nichols from Heart of Texas Con 2015 in which she reflects on her career and her most famous role:

Star Trek had other influences on the space program, as seen in this video about the official reveal of the first space shuttle, which was rechristened Enterprise at the urging of Star Trek fans. Much of the cast were present for the first public presentation of the ship. Of course in the film itself, that very same shuttle appears in the Rec Deck scene as part of a display of famous ships of the past named 'Enterprise.'

Here's some footage from the premiere:

Here's a promotional film advertising the movie's toyline, including the not-very-durable Enterprise bridge:

The film's famous movie poster wasn't the first conception, as this unused art by Bob Peak suggests a different direction the film's marketing might have gone in: 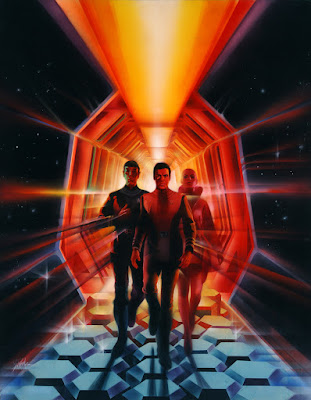 And the iconic final poster image was the inspiration for this lovely tribute poster for the latest Star Trek film, Star Trek Beyond: 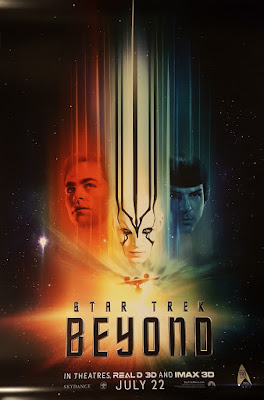 Thanks for listening!
Posted by Cinemaspection at 12:19 PM