While we try to cover as much as we can in our episodes, there's always more to see, hear, and read about a movie that can enhance your viewing experience. If you enjoyed our episode on Romeo Is Bleeding, here's a few extra bits you might find interesting... 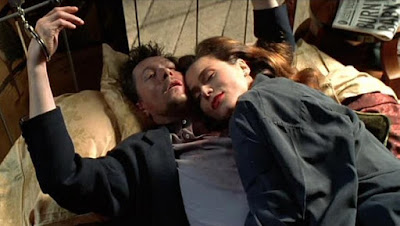 Here's the original trailer for the movie:

We touched on the varied career of director Peter Medak. In this interview he reflects on his career and explains his views on filmmaking, actors, and art:

As we mentioned, the film's title comes from a Tom Waits song that inspired screenwriter Hilary Henkin. Here's Waits performing that song.

We also discussed the song Always that Bon Jovi wrote for the film's end credits and pulled at the last minute. Here's the video for the song produced after the band eventually released the track:

Thanks for listening!
Posted by Cinemaspection at 8:11 PM