While we try to cover as much as we can in our episodes, there's always more to see, hear, and read about a movie that can enhance your viewing experience. If you enjoyed our episode on Dark Passage, here's a few extra bits you might find interesting... 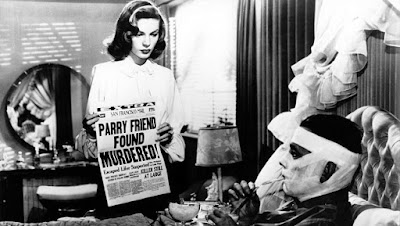 First, here's the original trailer, which sells the movie on the past pairings of Bacall and Bogart rather than the specifics of the story:

One detail we forgot to bring up during the episode involves the news clipping about Irene's father in the movie: 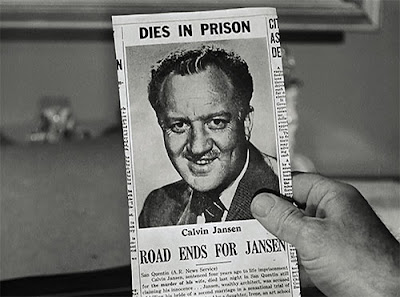 The photograph displayed actually allows for a cameo appearance by the film's director Delmar Daves, seen here with Bogart and Bacall in a publicity still: 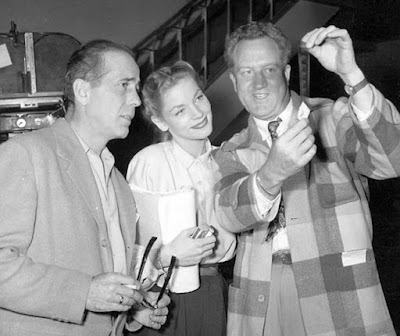 The blog REEF SF offers some great info on the use of San Francisco as a filming location in various movies.

Their entry on Dark Passage includes before and after photos of various spots used in the film, including Irene's beautiful apartment building, complete with the cardboard cut-out of Bogart we mentioned: 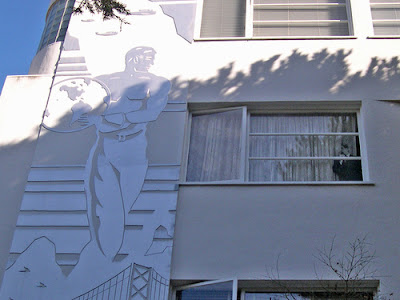 Aaron Finestone runs DavidGoodis.com, an excellent and very comprehensive website on David Goodis, author of the novel Dark Passage was based on. The website includes some info on a lawsuit Goodis filed against the creators of the television program The Fugitive, alleging the show's format was taken from his novel without acknowledgment. Check out the story here:

And finally, here's the episode of Tales From the Crypt we mentioned in this episode, "You, Murderer," featuring Isabella Rossellini, John Lithgow and a credited Bogart himself:

Enjoy and thanks for listening!!
Posted by Cinemaspection at 1:11 PM