(meant to be read as Rod Serling): Submitted for your approval, tonight's in-joke serves as an example and a warning that as one travels from the hallowed halls of higher education to the frightening foliage of the jungle, fraternity does not walk hand-in-hand with loyalty. Lesson to be learned... in the Twilight Zone... Movie. 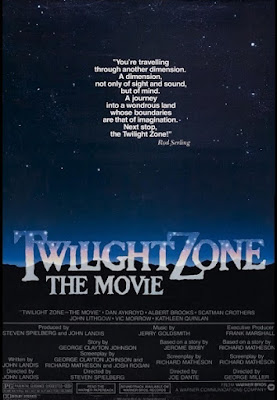 For this in-joke, we look at John Landis' infamous opening segment from this 1983 anthology adaptation of the television classic. Between the work of Landis and Joe Dante in this movie, there are a host of references and cameos to choose from, which we will no doubt address in some form eventually.

For right now, we'll focus on a throwaway reference in 'Time Out,' the first segment which became notorious following the accidental death of star Vic Morrow and two child actors in a helicopter accident during filming. Morrow plays a hateful bigot who is catapulted to various points in history, each time finding himself cast as one of the minorities he's railed against.

Late in the segment, the character lands in Vietnam and is happened upon by a squad of American soldiers, who mistake him for a North Vietnamese scout and unleash their weapons in all directions. During a break in the firing, one of the troopers nervously declares... 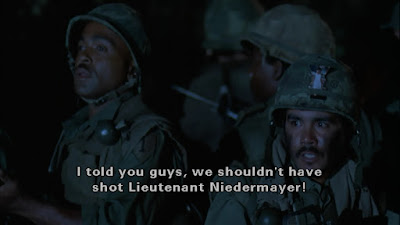 If that name sounds familiar, you might also be acquainted with this quite-unpleasant gentleman... 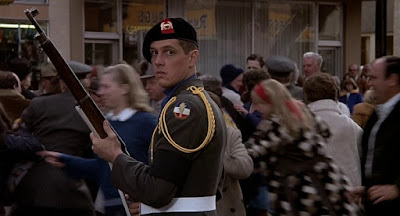 In the midst of the chaotic finale of that movie, we're shown text letting us know what became of each of the students in the film. Neidermeyer's reads like this: 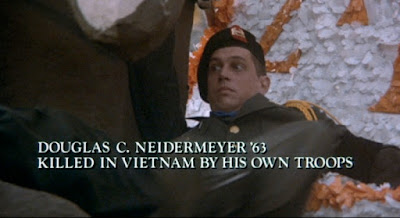 At least now we know who to thank. Given their treatment of both Neidermeyer and Morrow's character, this squad seems to be pretty adept at doling out karmic justice... in the Twilight Zone.
Posted by Cinemaspection at 7:44 PM