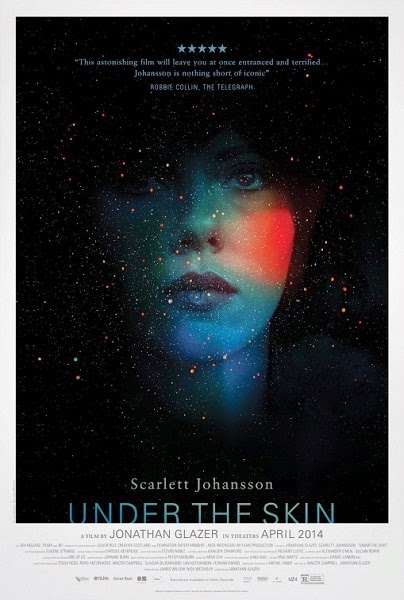 Cinema has a long tradition of otherworldly femme fatales disrupting society. The vampire brides of Dracula eventually begat Florence Marley's vegetable vampire in Queen of Blood, who would in turn flower into Mathilda May's hypnotic (and clothing-challenged) space vampire in Lifeforce and Natasha Henstridge's maternal monster in Species. In all these cases, the female is the dangerous and seductive other, a creature threatening to disrupt the masculine status quo who must be defeated, usually by a team of men. While superficially the plot of Under the Skin might suggest more of the same, this time mankind (with an emphasis on the men) is the 'other' as we observe it from the viewpoint of the invader. We meet the enemy and while she may not be us, she seems curious about becoming so.

But fair warning: those expecting lots of twist and turns, or even a moderate amount of dialogue, may find Jonathan Glazer's third feature a different beast. Glazer thus far has proved to be that wonderful kind of director who's impossible to pin down, debuting with the joyfully profane gangster comedy Sexy Beast and following it with the chilly, discomforting reincarnation drama Birth. While the novel by Michael Faber upon which this screenplay is based reportedly goes into more detail about exactly what's going on (I haven't had the opportunity to read it yet), Glazer strips out the explicit explanations in favor of dropping us into a world of bizarre imagery and dialogue-free weirdness that ensure the movie gets exactly where its title suggests. 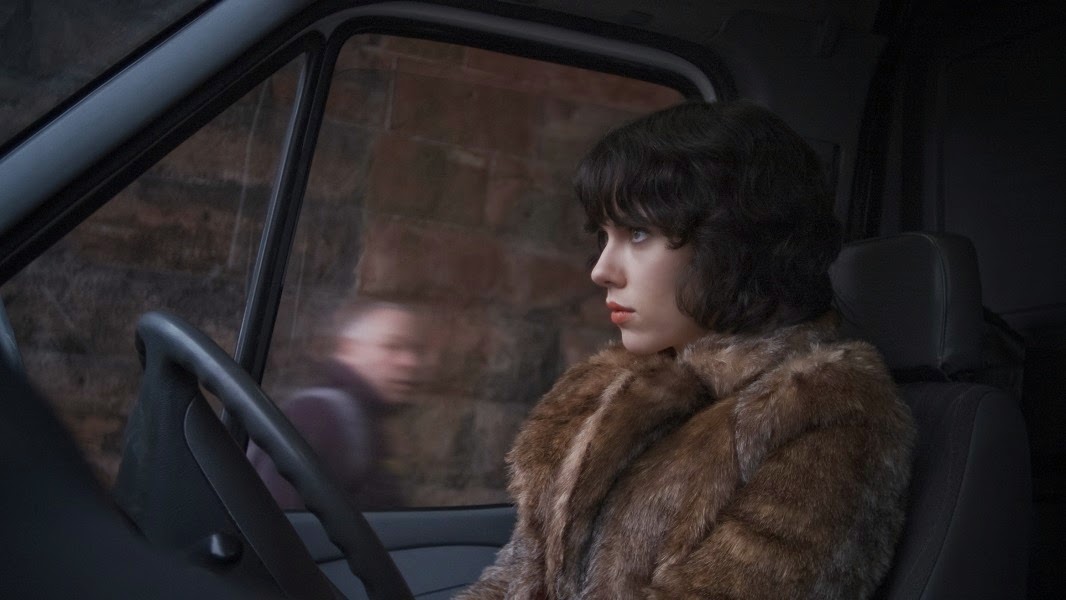 It's particularly disorienting to see Scarlett Johansson, one of America's sweethearts, cast as the mysterious, inhuman siren. Prowling the streets of Scotland in a van, she chats up the men she encounters with a few gently probing questions (to ensure her prey won't be missed) and convinces her eager victims to accompany her someplace so out-of-the-way it doesn't even seem to exist in our reality, where their lascivious expectations are turned against them and they disappear, never to be seen again. But as she continues this incessant ritual, a subtle change begins; she displays a nascent curiosity regarding the world around her and her impassive demeanor begins to betray traces of human emotion.

It's this subtly-indicated arc that gives this otherwise episodic film its shape. There aren't really any other major characters in the story, only people she encounters in her travels. Some linger a bit longer than others but none are given a whole lot of dimension in their limited screentime. This ordinarily might seem like a problem but the movie stays so locked into the lead character's nomadic existence that this limitation feels like an accurate representation of how she perceives people: vague, ill-defined shapes, some of which grow to mean something to the stirrings of personality in her.

The only other character who persists throughout the film is an equally mysterious figure on a motorcycle who follows Johansson and cleans up her messes, as well as providing her with her initial wardrobe. As she begins to evolve, his shadowing turns into a pursuit, making him seem less an assistant than a minder there to keep her on program and suggesting that her predatory activities are for the benefit of some unseen master. While some viewers have likened this relationship to that of a pimp with a prostitute, the operation they both take part in might also be representative of the exploitation of women in mass media, where they are often reduced to attractive sex objects intended to lure in victims/consumers and who become a problem to be dealt with if they show any signs of independence or agency. Indeed, the main character's attempts to own her sexuality and pursue activities beyond her mission each seem to point up the limitations imposed upon her. 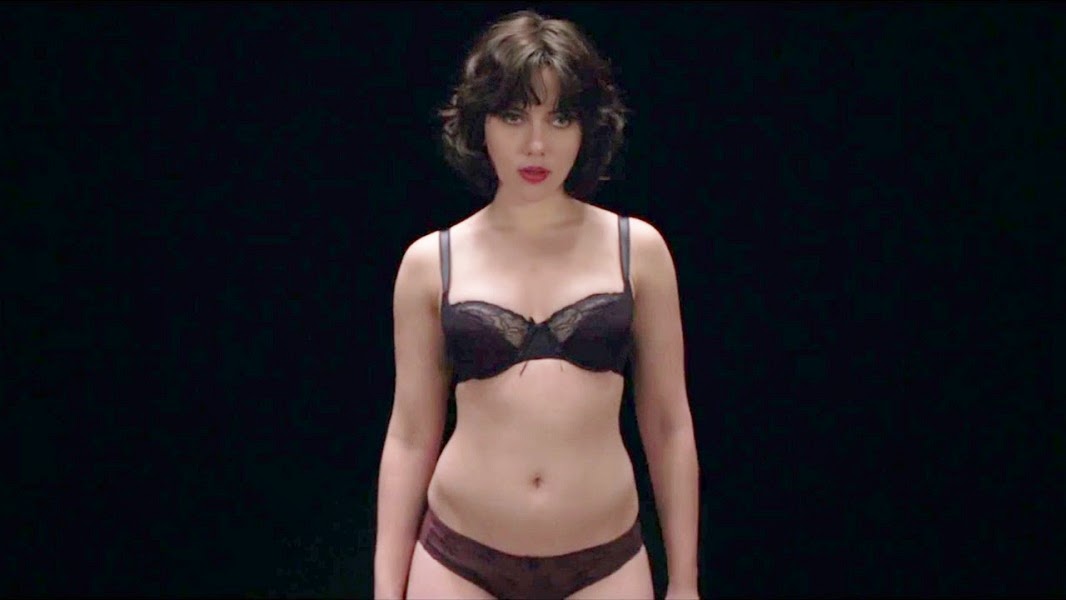 The nature of what's happening to her victims (or what it's all exactly for) is left unspecified and is depicted in such a surreal way, with each man single-mindedly pursuing a disrobing Johansson across a featureless void, that we're initially uncertain as to whether it's meant to be symbolic or to be taken literally. Each time the act is repeated we are fed slightly more detail but never clear-cut answers and it's left to us whether we should pity them as victims deceived into a nightmarish doom or take some satisfaction in watching their unmindful lust turned against them.

The exception provides the film's most spellbinding scene as our strange protagonist picks up a disfigured young man (Adam Pearson, who actually suffers from neurofibromatosis). He doesn't look at her with the same barely concealed desire as the others and her questions reveal his intense loneliness and isolation. After her quiet, tactile seduction, he literally pinches himself to be sure he isn't dreaming, making what we know lies in store for him all the more horrific. 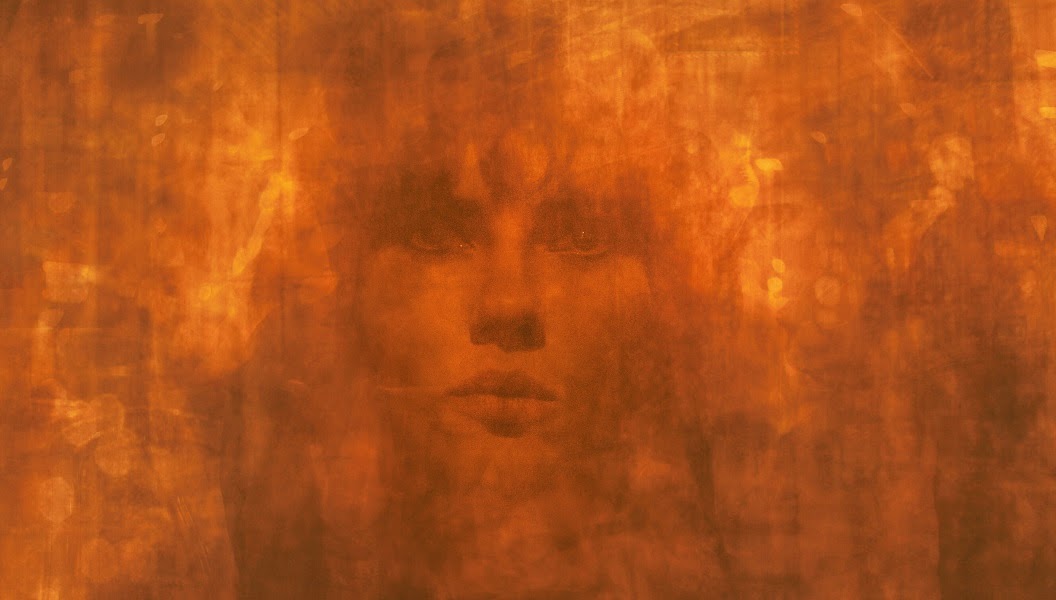 Johansson's minimalistic performance is the core of the movie and it's a brave one, less because of the nudity involved than for how easily it could have fallen flat. In a way it's the inverse of her role in last year's Her. Where in that film she created a warm, compassionate soul with only a voice, here she's plays practically an automaton with very little dialogue. As she charms men with her programmed chatter (and in a Scottish accent no less), it's chilling to watch the feigned flirtation fall away, replaced by a placid, predatory emptiness devoid of compassion. It's to Johansson's credit that she can modulate that blank stillness to suggest her character's growing curiosity, longing, and fear, bending a completely alien (and alienating) character into someone we can begin to empathize with, at least on a basic level.

Under the Skin is already a contender for one of my favorites of the year, but I don't think I can fault anyone for not being similarly entranced. By its nature, it's sure to a divisive film; its pacing might prove hypnotic for some, boring for others, while Glazer's stubborn resistance to offer a traditional plot or relatable characters could easily turn off viewers. A good litmus test for this one might be to consider one's reaction to similarly polarizing films such as Beyond the Black Rainbow or Upstream Color, two films presented in a equally obtuse and disquieting aesthetic. If you're open to such unconventional approaches to storytelling, you may find a haunting bit of science fiction and a unique take on gender relations hiding beneath its seductive surface.

Ok, so thus endeth the review, now begins the discussion. What did you think? Agree? Disagree? Did I miss something worth mentioning? Leave your comments below.

Posted by Cinemaspection at 3:10 PM