Movie In-Jokes: The Hitchhiker's Guide to the Galaxy

This time, we discover Steve Jobs had a role to play in determining the ultimate answer to life, the universe and everything as we peek at a sly bit of product placement in the film version of The Hitchhiker's Guide to the Galaxy. 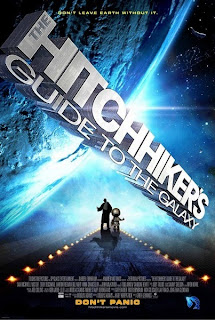 One of the major plot strands of the radio series/book/TV show/film is the creation of Deep Thought, a massive computer specifically designed to determine the previously alluded-to answer. Late in the film, some of our heroes visit the computer (voiced by Helen Mirren) for some guidance. On a close-up of Deep Thought's HAL-inspired visual sensor, we see a familiar logo:

The reference's origin goes back to when Apple first began selling its Apple Macintosh computer. Hitchhiker's Guide author and technophile Douglas Adams was a staunch supporter of the machine and was allegedly bought the first one sold in Europe (interestingly, the second was supposedly bought by author/actor Stephen Fry, who provides the voice of the Guide in the film). 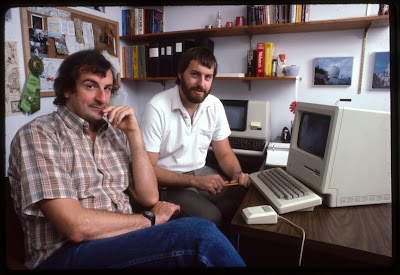 Adams (seen above with Steve Meretsky, who helped him write the Hitchhiker's Guide computer game) would eventually participate in some of Apple's advertising campaigns. He also praised the Mac OS X operating system and extolled its virtues on his web forum shortly before his passing in 2001.
Posted by Cinemaspection at 9:07 PM

Email ThisBlogThis!Share to TwitterShare to FacebookShare to Pinterest
Labels: in-jokes, product placement, The Hitchhiker's Guide to the Galaxy